What is the obligation of prayer?

Muslims pray for Allah five obligatory prayers and sunnahs of prayer. Prayer is one of the essential five pillars of Islam next to the two testifications of faith. Allah enjoined them on our beloved prophet (PBUH) on the night of Al-Miraj (the ascension of the prophet). Prayer has a special value to Allah because it is organized in the most wonderful way to act worship. It includes the remembrance of Allah Almighty, the recitation of the Qur’an, standing humbly, bowing, prostration, supplication, and Takbeer (uttering the words ‘Allahu Akbar’).

Surah An-Nisa: “But when you become secure, re-establish [regular] prayer. Indeed, prayer has been decreed upon the believers a decree of specified times (103)”

There are many Quranic ayat indicating the importance of prayer and showing how it is obligatory on all Muslim individuals. Allah made a difference between Muslims and non-Muslims. It is a great sin that may put the person (that who doesn’t pray) on the same side as kafir (infidel). Another benefit and a greatness sign for the prayer is that it changes the morals for the best.

Is it important to pray Sunnahs of prayer?

Actually, the answer is Yes it is very important to pray sunnahs of prayer. Although it is not obligated by Allah, it is done by our beloved prophet Muhammad (PBUH). Generally, sunnahs are practices we believe that are originally performed by Muhammad (PBUH). As he is an example to Muslims, we all have to follow him and his sunnahs. They are mustahabb (encouraged) deeds; if we made them, we will earn great thawab (rewards) and this may ease the entrance to al-Jannah.

The main aim to pray sunnahs is to get closer and closer to Allah to gain his love and forgiveness. But also sunnahs of prayer complete any shortage in our obligatory prayer. Most of us may lose a part of our concentration during praying, because of being in hurry. We can say that the quality of our prayer maybe about 50% only not more. Adding the sunnahs can lift the grade to the full mark.

How many sunnahs are in each prayer?

According to Imam Nisaai and Imam Tirmidhi, the sunnahs of prayer are: 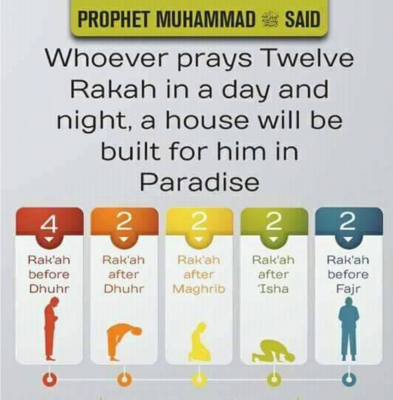 There are other voluntary prayers in Islam:

What are the conditions of prayer Salat that must be fulfilled before performing them?

1. Purification of your body:

Before the prayer, you must be cleaned from al-hadath, which prevents the person from performing worship. This is done by wudu or taking a shower if your body is dirty or after marital relation.

2. Purification From the Najasah:

It means the dirty materials; before praying, you should assure that your clothes and praying place are clean. It is better to use special were and carpet for your regular prayer.

Allah indicated the body parts should be covered from each man and woman. During your prayer, you must wear the proper clothes; for men cover your shoulders and the lower part of your body. For women, cover your whole body from hair to toe except the face and the hands. Don’t forget that you should wear clean clothes.

While praying, you must stand towards El-Kaaba (the Grand Mosque) in Mecca. Kaaba is our qiblah; we are requested to detect the direction of it from wherever we are. Ask somebody or use the compass if you want to find the right direction of praying.

It is forbidden to pray before the exact time (al-azan) because each prayer has its own timing. If you live in a non-Muslim country and no azan can be heard beside you, you can get the exact timing of each prayer from the internet. Also, nowadays there are plenty of mobile phones apps that offer prayer time and it may call on each time daily.

6. Intention for the prayer:

In Islam, the intention is very important but it is essential for all worships. Before the prayer, you must make a sincere intention to Allah asking him for his forgiveness. While you are standing on your carpet, say your intention directly from the heart by tongue secretly to feel it before starting your meeting with Allah (al-salah).

What are the forbidden times of prayer?

Surah Al-Isra: “Establish prayer at the decline of the sun [from its meridian] until the darkness of the night and [also] the Qur’ān [i.e., recitation] of dawn. Indeed, the recitation of dawn is ever witnessed (78)”

There are three times, we Muslims can’t pray at them; sunrise, sunset, and zawaal.