The importance of learning how to pray in Islam is because Prayer represents the soul of Islam and its second pillar. It is the complement of entering the Islamic religion and being a believing Muslim.

A Muslim prays 5 times a day to keep his relationship with God alive and strong all the time. It is the contemplation of the Muslim which brings comfort to his soul and relieves him of tension, this is why prayer is for the Muslim more than it is for God.

This article will give you a brief guide to know how to pray in Islam according to the Hanafi school of Islamic jurisprudence.

How to pray in Islam: first things come first

How to pray in Islam: the first Rakaa (unit) is the same in all prayers

All prayers have the same 3 essential parts in their Rakaat:

these are the number of Rakaat in each prayer:

first, you will know how to pray in Islam a prayer of 4 Rakaat (Alzuhr, Alaser and Aleisha’):

The Start of each pray

1-At the beginning of each prayer, Spread your palm and raise it next to your ears and say: “ALLAH AKBAR’’ which means god is the greatest.

This word is called “the takbeera” and it is always said when bowing and prostrating in prayer, but when it is said at the opening of the prayer like now, it is called “ takbeerat al-ehram”.

2-Then you read Surat Al-Fatihah and seal it by saying “Amin’’ in prayer. after that, you read one of the other Surahs of the Qur’an or part of it. 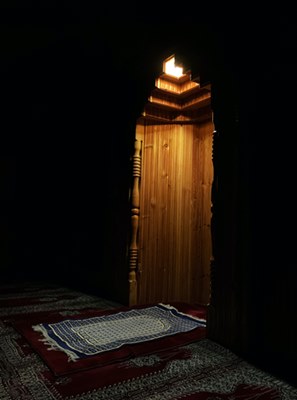 3-Now you have to do (Rukue), say “ALLAH AKBAR’’ again then Bend your back until you are at a right angle with your foot and say “Subhana rabbiy al-Azim” 3 times, it means Glory be to my Lord the Great.

4-Now you finished Rukue, Raise your back again and say “Sami-Allahu liman hamdah” one time, MEANS God listens to those who praise Him.

Then, if you are not praying behind an Imam, say “rabbana walak alhamd” MEANS Our Lord, to you the praise.

How to do Sujud

5-this is the final step in Rakaa (Sujud), you will go down on the ground saying “ALLAH AKBAR’’ and prostrate.

Prostration is performed on seven parts of the body: the palms, the knees, the nose, the forehead and the toes of the feet.

6-when these parts touch the floor, you say ‘Subhana Rabbiy-al-Aalaa’ 3 times, MEANS Glory be to my Lord the Highest.

7-Then you will raise your back saying “ALLAH AKBAR’’ to sit shortly between two Sajda and say “rabiy eghfir le wa liwalidi” MEANS Lord forgive me and my parents then go down to do the second Sujdah.

8- Restorate again on the floor saying “ALLAH AKBAR’’ then say what you have said in the first Sujud.

How will you complete the pray?

9-Now you have finished first Rakaa, rise up saying “ALLAH AKBAR’’ and do the same previous step until you reach the second sujud.

this means: All compliments are for Allah, and prayers and goodness. Peace be upon you Prophet and the mercy of Allah and His blessings. Peace be upon us and on the righteous servants of Allah

11-Right now you are halfway to finish your pray, rise up to do your third Rakaa exactly like you did the first one but without saying a short Surah after Al-Fatihah.

12-After finishing your third Rakaa rise up saying “ALLAH AKBAR’’ and do the same steps again also without saying a short Surah.

13-At the end of the prayer, you will set down to do The Second Tashaahud.

you will say the exact same words of The First Tashaahud then recite the following:

After you finish, you can ask God whatever you want in your Dua.

How to pray in Islam: AL-Fagir and AL-Maghrib

In Fagir prayer, you just pray 2 Rakaat. it is just like the first 2 Rakaat we learnt previously but you read The Second Tashaahud at the end of the prayer not only the first.

What can I do to increase my Focuses during prayer?

When you pray in a dimly lit place, your ability to focus on prayer increases which brings reverence. Also changing the short Surahs you recite each time you pray increases forethought.