Abraham in the Quran was mentioned 69 times. He is the father of the prophets and the first messenger commissioned with the message of monotheism and the call to worship the one God, and from it, the Christian and Jewish religion arose, then Islam, which is the religion closest to the principles of monotheism.

Abraham in the Quran has many stories and incidents mentioned, from the start of his life when he was trying to find the greatest asset in the universe to worship, till his popular exotic story with his son Esmaill when God ordered him to slaughter his son as a test of faith. And finally their story of Building the Kaaba together.

Until Allah sent him the revelation (wahy) and informed him that he would be his messenger on earth to call to worship him alone. And here Abraham knew the true God.

Abraham in the Quran: his story with his people

The beginning of the call to his people

The Prophet of God, Abraham, began the call to worship God alone with his family. The first to believe in him was his wife and his relative Hager and with her a few of his family and people.
And the Prophet Ibrahim tried hard to make his father ‘Azar’ -who worked as a carpenter and sculpting idols and sells- stop calling the idol and the stone that is of no use, but he refused, reasoning that this is the religion that all people worshipped long ago.

(And when his Lord tested Ibrahim with certain words, and he fulfilled them, He said, “I am making you the Imam of mankind.” Said he, “And from among my descendants?” He said, “My pledge does not extend to the unjust”)

Abraham’s biggest lesson to his people

To prove to his people that their idols do neither harm nor benefit, the Prophet Abraham smashed all the idols and statues on a festive day when people were not in the temple and put the hammer with which he smashed the idols in the hands of the largest idol worshipped.

And when the people saw what had happened to their idols, they panicked and began to ask who might be tempted to do so. One of them mentioned that Ibrahim used to mention their gods badly, so they came to him and asked him if he had done it.
And he told them to ask their greatest God if he could talk to them as he is the one who did it.

folks of Abraham setting him on fire

In this way, Abraham proved the invalidity of their worship of idols, so a group of them admitted the validity of his proof and believed in God, and most of them remained in their misguidance.

And the people agreed to the punishment of Abraham the Prophet, it was a brutal punishment by throwing him into the fire, burning him to death. And they brought a man named “Haizan” to make a catapult to put Abraham, peace be upon him, into the fire, and they began to collect firewood and lit the fire.
It continued flaming, and a spark rose from, with a blaze have never been seen before.

How was Abraham in the fire?

The people tied Abraham with ropes and threw him with catapults into the fire, so God commanded the fire to be cool and peace for Abraham, and Gabriel came down to him asking to bring whatever he wanted, but he told him that he didn’t want anything.
Abraham stayed in the fire for 40 days, during which no scratches hit him and only the ropes that he was tied to were being hit.
(Allah said, “O fire, be coolness and safety upon Abraham”).

Abraham in the Quran: Ibraham and his son in Mekka 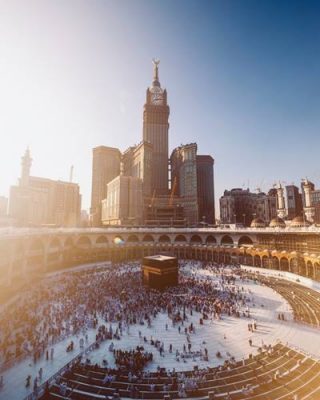 The Prophet Abraham, with his wife, emigrated to the Arabian Peninsula, specifically to the Hijaz, the country of abundant bounties.

His great sacrifice of his son

(And when he reached with him [the age of] exertion,1 he said, “O my son, indeed I have seen in a dream that I [must] sacrifice you, so see what you think.” He said, “O my father, do as you are commanded. You will find me, if Allah wills, of the steadfast”).
Al-Saffat verse:102

How did prophet Ismail react?

The Prophet Ismail responded to the desire of God Almighty and told his father to do what God commanded him. When the Prophet Abraham put the knife on the neck of his son and before he had the initiative to slaughter him, Gabriel, peace be upon him, came down to redeem the Prophet Ismail with a great sacrifice, and this day would be a feast day for Muslims in which they sacrifice sheep and calves to draw near to God Almighty in Eid Al-al’adhaa.

Abraham with his son building Al-Kabaa

God Almighty commanded Abraham, peace be upon him, to build the Kaaba, so he returned to Mecca, leaving the Levant, and met his son Ismail, and told him what they had to do. And God Almighty revealed the chosen location of the Kaaba, so Ibrahim gathered the stones with his son and laid the foundations of the Sacred House.
The angels were the first to circumambulate the Kaaba, then the Prophet of God, Abraham and his son Ismail did.

Ever since the Kabaa has been the main destination for all Muslims in the world.

(And [mention] when Abraham was raising the foundations of the House and [with him] Ismael, [saying], “Our Lord, accept [this] from us. Indeed, You are the Hearing, the Knowing).
Al-Baqarah verse:127

-Issa in Quran: how many times was Jesus mentioned?

–Why is Islam growing so fast? | What are the rules of Islam?

–How many verses in the Quran? | What does the Quran teach?